Conflict of interest is a common issue in the workplace. Most of us have heard someone say, “It’s who you know, not what you know.” We have heard co-workers complain that a manager’s relative always gets the biggest raise or the best assignment. We might have seen colleagues accept gifts from potential vendors. Maybe a co-worker leaves work 20 minutes early every day so she can get to her second job. A supervisor may give a co-worker time off from work to do volunteer work or might allow employees to solicit donations and funds in the workplace, whether for the Girl Scouts or a local school function. Even though these situations are very different, they all fall under the heading of “conflict of interest.”

What is a Conflict of Interest?

A conflict of interest occurs when an individual’s personal interests – family, friendships, financial, or social factors – could compromise his or her judgment, decisions, or actions in the workplace. Government agencies take conflicts of interest so seriously that they are regulated. Industry organizations, corporations, and universities, including our university, follow that lead by including conflicts of interest in our policies, regulations, and standards of operating procedures. For our university, we must follow Florida’s Code of Ethics for Public Officers and Employees that includes standards of conduct and reporting requirements.

Conflicts of interest are a clash that most often occurs between requirements and interests. Various types of conflicts of interest can occur because of the nature of relationships versus rules of organizations or federal and state laws. People can easily become biased (have an unfair preference) because of small things like friendship, food, or flattery, or they may be influenced to make a decision because of the potential to gain power, prestige, or money. Conflicts can occur when an individual makes or influences a decision and does so for some personal gain that may be unfair, unethical, or even illegal. The important part is what you do in each of those situations. Do you allow your family, friendship, financial, or inside knowledge affect your actions? If you do, you could be violating state statute and university policy.

In our work lives, we also have interests that could influence the way we do our jobs and the decisions we make. Even if we never act on them, there may be an appearance that a conflict of interest has influenced our decisions. Consider this example. Your supervisor is promoted to department director. His daughter-in-law is hired as a new supervisor within the college but is not reporting to him. Maybe the new supervisor is the best candidate for that position, and maybe the new department director had nothing to do with her hire. Even if this hire met all of the requirements under our Employment of Relatives policy, the situation appears suspicious and employees may think that something was unfair or unethical about her hire.

When you identify a situation that may be a conflict, or could be perceived as a conflict, notify your supervisor or University Compliance, Ethics, and Risk at complianceandethics@ucf.edu. They can help advise you on how to either remove the conflict by recusing yourself from the situation altogether, or develop a management plan to manage the conflict.

“When in doubt, ask” is an old saying that makes a great deal of sense when working through conflicts of interest. There is no harm in asking, but there could be a great deal of harm to an individual, the organization, or both, by not asking. It is always best to be transparent and accountable to ensure we eliminate either the perceived or actual conflict of interest. 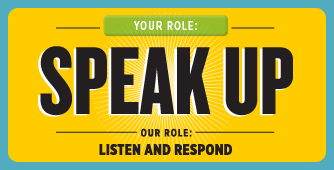 View the Employee
Code of Conduct